Acclaimed songwriter Duke Special performs an intimate Lunchtime Concert – the perfect accompaniment to the workshops Duke is facilitating at the Academy. 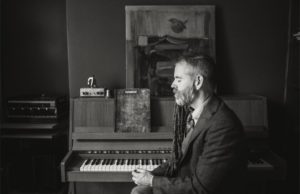 By nature, Duke Special is a curious person. He is curious about theatre, books, music, poetry, art, love, life, redemption, death, 78RPM records and most recently, gardening! All of this is evidenced by the variety of musical adventures throughout his career. His creative talents have seen him involved in projects as diverse as writing the theme tune for the Irish Sesame Street to writing the music for and appearing in Deborah Warner’s critically acclaimed 2009 production of Bertolt Brecht’s “Mother Courage and Her Children” at London’s National Theatre. He has presented a documentary on the life of 50s’ megastar Ruby Murray and has been commissioned by the Metropolitan Museum of Art in New York to write a series of original songs based on photographs for their exhibition of the photographers Stieglitz, Steichen, and Strand. More recently, he joined forces with stand-up comedian Andrew Doyle, together bringing a brand-new musical adaptation of “Gulliver’s Travels” to the Lyric Theatre in his native Belfast. In 2016 he was appointed as the Artist in Residence at the Lyric and as part of this residency, he worked on writing a musical adaptation of Huckleberry Finn, based on songs written by Kurt Weill, which premiered in2018. Duke has just finished his latest studio album, “Hallow”;a beautiful collection of songs entirely based on poems by Belfast contemporary poet Michael Longley, who was once described by his friend Seamus Heaney as “a keeper of the artistic estate, a custodian of griefs and wonders”. His poetry is full of gentleness, honesty, mischief and love, and peppered with a cast of artists, animals, flowers, friends and long forgotten soldiers. As ever, Duke Special is mining a new seam of inspiration, always trying to get to the bottom of what it means to be human.