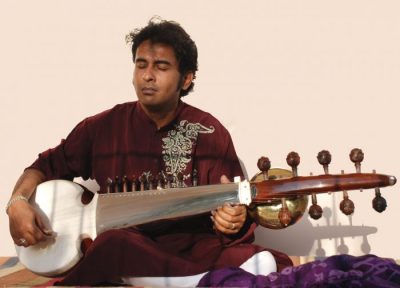 This concert will be an instrumental recital of North Indian classical music on the 25 stringed lute called sarode.  North Indian music is based around the melodic principal of raga, which could be described as a gestalt modal aesthetic which follows strict grammatical and structural rules based on a fixed cluster of scale material.  The sarode  is one of the most prominent stringed instruments in the performance of modern North Indian music. It is renowned for its depth of tone and its ability to create beautiful glissando passages due to its fretless neck.

Sougata Roy Chowdhury is considered to be among the most talented sarode players of his generation. Sougata started to learn sarode at the age of 10 with Ustad Dyanesh Khan, son of the great sarode maestro Ustad Ali Akbar Khan. He has also studied with Ustad Ashish Khan and more recently with esteemed sitarist Pandit Santosh Banerjee. He has toured and performed extensively across India, Europe and the United States.