A new initiative from MA Songwriting introduces the
Sunset Concert Series, where visiting songwriters
perform a 45 minutes live set in the Tower Theatre,
starting at 5:30pm. These select performers will have
spent the day with our Songwriting students and end
the visit with a live set.
Admission is free and all are welcome. 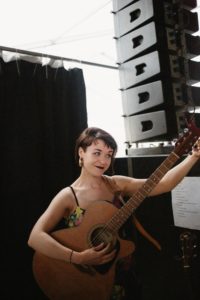 Emma Langford first broke on to the scene 3 years ago
with a 6-track crowd-funded EP, and since then has quickly
woven herself into the DNA of the Irish folk scene on an
international scale. Emma has channeled her influences
and honed her craft, creating a sound that intricately
blends folk, jazz, and Irish traditional nuance. Her voice
dances the line between sweet and defiant, and combined
with her distinct brazen wit, has endeared her to Irish and
international audiences alike.
She launched her first album, “Quiet Giant”, in 2017, before
going on to win an RTÉ Radio 1 Folk Award in 2018. The Irish
Times described the Limerick woman’s debut as an album
that “weaves a spell as you listen to it… An enduring piece
of work”, and the artist herself as a “treasure in Ireland’s
music scene”. Hot on the heels of her hugely successful
summer single, Goodbye Hawaii, Emma is now touring
Ireland, Germany, the US and France, on the release tour
for her second single off her forthcoming sophomore
album, “The Winding Way Down to Kell’s Bay”.
“A beguiling, distinctive voice and a keen ear for a quirky
melody, the young Limerick singer- songwriter seems to
have arrived fully-formed.” – Hot Press