The Irish World Academy of Music and Dance is delighted to confirm the appointment of Mayoman Seamus Fogarty as Songwriter-in-Residence for the remainder of the Academic Year 2017/18. Seamus has accepted the invitation from Carl Corcoran, Course Director for the inaugural year of the MA Songwriting at the Academy in UL. London based Fogarty recently released his third album, The Curious Hand, this time on the Domino Record label to wide critical acclaim. The album, co-produced by Fogarty and renowned Producer Leo Abrahams (Wild Beasts/Regina Spektor) elevates this musical alchemist into a whole new bracket of artist. His residency at the Academy will entail several visits to the stunning Shannon-side location on the campus of Limerick University during which he will facilitate workshops and performances with the MA students. Speaking of the appointment, Course Director, Carl Corcoran enthused, “I have been a fan of Seamus’s since first hearing his Fence Record release God Damn You Mountain back in 2012. I played him regularly during my tenure as curator and presenter of the Blue of the Night, a late night musical potpourri on RTE Lyric fm. His blend of alt-folk, electronica and downright honest songwriting sat perfectly in the music mix of Blue, often placed in eclectic mixes between such choices as Steve Reich and Haydn and more. I am thrilled that Seamus has accepted our invitation and look forward to a fruitful association.” Seamus himself had this to say, “Its a great thrill to be involved in such a progressive programme on a campus where music is dripping out of the walls.  The range of songwriters Carl has enlisted are all highly-skilled practitioners with a diverse range of influences, reflecting the myriad of approaches to songwriting in all its various forms.” 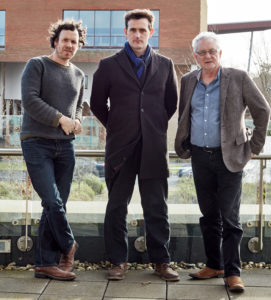